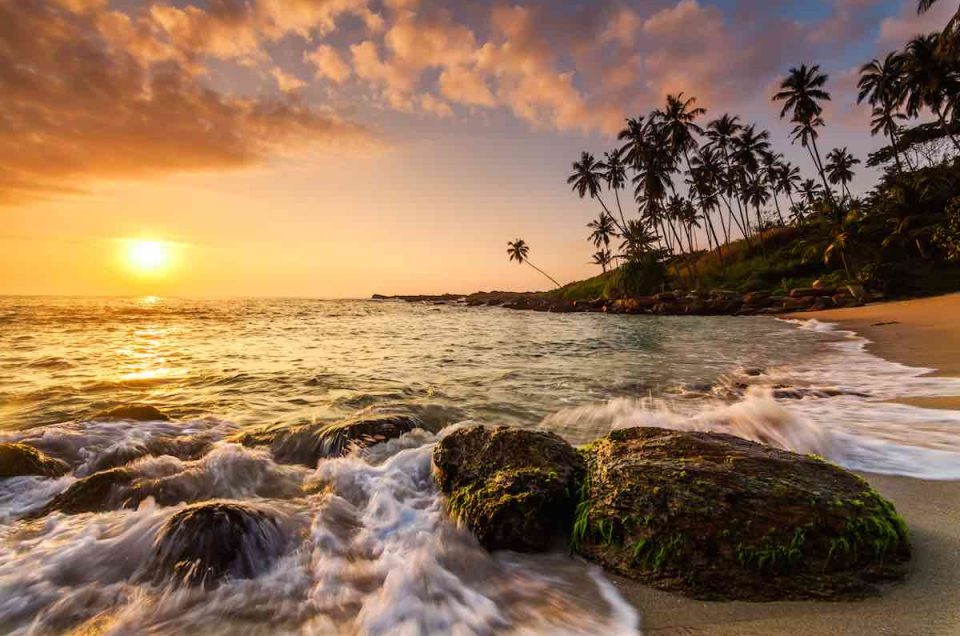 With so many beaches to choose from it can be difficult to know which to visit. We’ve taken it upon ourselves to try and make the decision easier. We are describing six of the best beaches in Sri Lanka and what they can offer visitors to Sri Lanka.

Golden tan beaches fringed with palm trees are abundant along the coast of the teardrop-shaped island of Sri Lanka. Beaches invite you to relax and rejuvenate with traditional Ayurvedic treatments. Guests can also simply enjoy a lazy day of food, drink and great local hospitality. Beachfront resorts range from 5 star luxury resorts nestled beautifully amongst nature with every mod con. Small villas run by local families ready to share this island paradise. Whatever your beach holiday style, we can build a package in Sri Lanka for you.

This beach is first on the list because it really has it all. Visitors are greeted with immaculate golden sand to relax on and soak up the sun. Active guests can participate in water sports or go on wildlife adventures. Due to its location near to the bustling city of Galle, Unawatuna is the busiest beach on Sri Lanka’s southern coast. Despite it’s popularity, this best beach in Sri Lanka is never anywhere near as crowded as the coasts of Spain or Bali. Unawatuna feels pleasantly alive but laid back.

The beach curves like a horseshoe around a calm bay. The geography makes it perfect for swimming and snorkelling. Turtle sightings are not unusual along the beach, where mothers come to lay eggs at night. Among the coconut palm trees that back the shoreline are lively bars and bistros serving up fresh seafood and catchy music. Visitors to this beach will not leave disappointed.

Otherwise called Goyambokka, this is one of the most beautiful beaches you could possibly find. Depending on what you prefer, you can visit during the peak season (December to April), when all the shops and hotels are open, or the off-season (May to November), which is a lot quieter but still very picturesque.

In general, Tangalle has a relaxed, tranquil vibe compared to some of the other popular beaches. It is the perfect place to work on a tan while enjoying some eco-friendly hospitality at one of the beach-side cabanas.

There are actually several beaches at this spot on the west coast, all of which are collectively known as Bentota Beach. They form a sandy spit that runs parallel to the azure Bentota Ganga lagoon on one side, and meets the sea on the other. Hence the beach is like a peninsula of its own.

The surrounding area is known to have several high-end luxury hotels and resorts. At their spas you can enjoy traditional Ayurvedic treatments that use herbs in various forms to rejuvenate the mind and body.
Bentota is also great for watersports – windsurfing, canoeing, diving, jet-skiing, and snorkelling are just a few that you can try out here!

Upon arriving in Mirissa you will be greeted with the sight of gentle waves breaking along a two kilometre long stretch of white sand. The beach is divided by a rocky outcrop called Parrot Rock, which has panoramic views of the shoreline for those who climb up the short flight of stairs to the top.
As the sun sets and dusk falls, the beach bars light up and create a romantic ambience. Watch out for green turtles coming up onto the beach at night.

Mirissa is also a popular whale-watching destination; tour boats leave from the pier at one end of the beach and offer half day trips out to sea. Elusive despite their size, blue whales come this way during their annual migration, making it one of the few places in the world where you can see them from a boat. Manta rays, flying fish, dolphins and sharks are some other species you might get to observe in the wild.

Arugam Bay is the quintessential chilled surfer paradise. It sits on the eastern seaboard of Sri Lanka and so is perfectly placed to receive solid swells and rolling waves. Surfers from all around the world descend on this little-known village and make it their home during the season. This gives Arugam an interestingly varied and colourful culture for such a small place. Surfing lessons are easy to come by and you can rent a board for as little as $2. As you can probably imagine, yoga is also a popular pursuit around here, and classes are held often in beachside venues.

The balmy weather lasts throughout the year here, as do the gorgeous sunsets. Once you’ve tired yourself out catching waves, lie back in a hammock strung between two palm trees and watch the world go by.

Discover this beach on our off the beaten track tour of Eastern Sri Lanka.

Another west coast gem lies in the little beach town of Hikkaduwa. It is a scuba diving and snorkelling haven from January through March, and is perfect for enjoying the three Ss (sun, sea and sand, of course) all year round. Hikkaduwa is one of the most popular beaches in Sri Lanka. It is a bit more developed than other parts of the coast, so you can expect to find a wealth of places to dine out and stay the night. However if you’d rather avoid the crowds, simply hire a scooter and seek out one of the smaller beaches in the area, away from the bigger hotels. You might be lucky enough to spot one of the several large turtles in the area poking their head above the water.